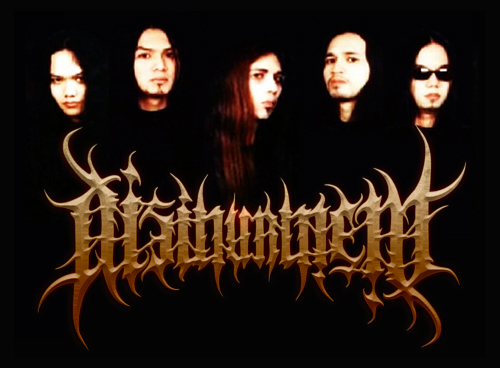 During these dark and trying global recession times, exploring cult-classic music genres can be a good distraction, and listening to brutal death metal and grindcore music album “Domination Defied” from the band “Disinterment” will be a good start for many of you all. Domination Defied barges into the projectile in 2004 set forth by the vehemence of Defiled Covenant and the incessant stabbing of Demoniacal Dispel albums released in 2003. From the epic cover art to the befitting song titles to the unforgiving music itself, the Disinterment band thrust perpetuates. The tortuous track titles like “Decapitating The Devourer”, “Devotional Ruination,” “Dreadful Insurrection,” “Decimated Descendants,” “Deceptive Indoctrination” and the unhinged “Domination Defied” set this release apart with it’s sonic brutality unlatched by “Disintro ll” (uncredited in the CD). The vocals in this album is full of wrath, much more thunderous and arresting. Domination Defied twists and turns in unexpected ways all throughout the frantic battery and unsettling riffs.

“Domination Defied” is raw as hell, with a dense sound and crushing tones. All the songs contain plenty of warped and contorted flutters, and shifts to more discernable epic brutality. Listen through the atmospheric murk and you’ll hear a compelling bombardment of riffs that are just enthralling to behold. This is brutal metal at its most primeval manifestation ushered by diabolical riffs chugging away.

A very strong collection of great quality songs, and strong musicianship in Domination Defied is indeed a must listen for all metalheads out there. So, if you like the incantations blend of death metal, you’ll probably like Disinterment’s solid masterpiece here.

“Domination Defied” is available on all music stores in the Tri-state area, go check it out!

Listen to Disinterment band on Spotify:

8 Chords You Should Always Remember