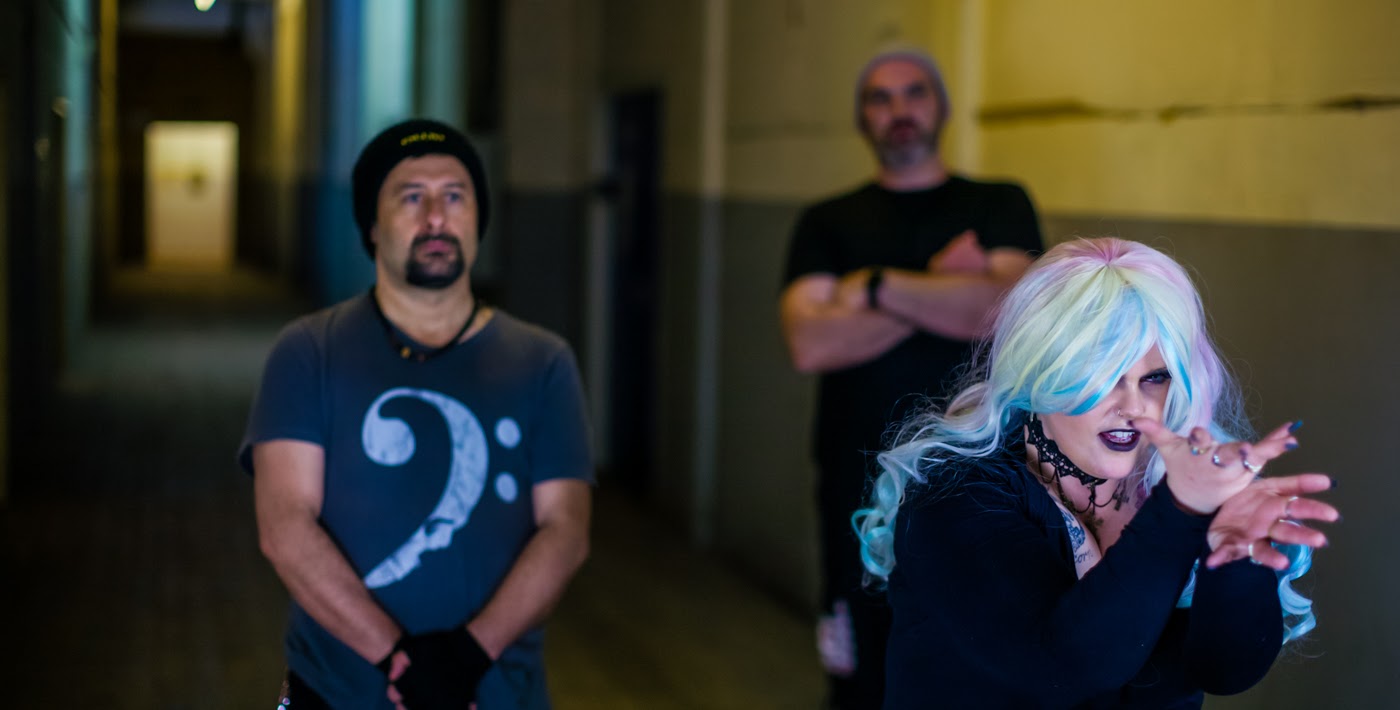 Today, on Guitaa Artist Centerstage, we have Birmingham’s new Rock band “Shadow And Veils” who are making sense of their lives through irresistible hard rock music. A creative lyrical thought process with upbeat music over their blissed-out songs is a key factor in what makes this band just so genuine. “Shadow and Veils” is a 3-piece band and has already made it to MTV USA Top 100 charts because of their latest song “Welcome To My Funeral”

Our team conducted an interview with all the 3 members of the band to find out more about their musical journey as a band. So, Let’s get to know about the journey of the band, about their passion, and many more.

Jez:
We are Shadows and Veils a 3-piece band from Birmingham in the UK. We consist of Laura(Vocals), Fabio(Bass), and Jez(Drums).

Fabio:
We decided to build our sound on Bass and Drums excluding any polyphonic instruments from our line up with the exception of some samples. Providing Laura with monophonic support has allowed her to be vocally free to combine different scales and harmonic patterns that are common in traditional Celtic music.

Within a mixture of styles, we can be mostly described as fitting into the Rock genre.

Jez:
My Dad brought me up on a strict diet of Led Zeppelin, Dire Straits, and The Police. My Mom was very much into Classical and Jazz music. When I started to show an interest in being a drummer, like my Dad, I was taken to Jazz clubs in and around Birmingham and also to the Symphony Hall to see orchestras play. I started having lessons from a Percussionist in the City of Birmingham Symphony Orchestra (CBSO), and she taught me how to diversify my style and branch out from the usual 4/4. As I grew my love for Rock music became the loudest thing in my ears. With bands like Linkin Park, Disturbed, and Slipknot but my love for all music never left me and still continues to influence me to this day. I enjoy all genres and feel that you must appreciate them all.

Fabio:
I come from a family of professional musicians, my Dad used to play for the American Forces 6 nights a week. During the day we had all kinds of new and old music blasting in the house to pick new songs for his set…it ranging from Santana to Blood Sweat and Tears, Elvis to Sinatra. My older brother was heavily into Led Zeppelin and got me hooked pretty much straight away. When I eventually picked up the Bass I was fortunate to have been exposed to such broad musical influences.

Fabio:
Every gig is memorable for one reason or the other.

Jez:
Most of the time we like to think that we are a professional band, who make sure everything is to hand. However, at one gig a couple of years ago we traveled all the way to a gig in Nottingham. Everything was going well we had the soundcheck and it was all sounding great. We were due to go on at 9 pm. We kicked off the gig and everything seemed perfect. Then about halfway through the first song, there was a crash at the back. Our drummer Jez had fallen off the back of the stage.

As you may know when playing a venue, sometimes you turn up and there is enough room on stage to fit an entire orchestra and other times there isn’t enough room for the drummer. Well this is one of those times. We had sound checked with the lights on so Jez could see the edge of the stage. But once we had started the lights went out and he couldn’t see it anymore. Thankfully it wasn’t a big drop and I was fine. I stood up, waved to the crowd, who gave him a big cheer and we carried on.

Jez:
John Bonham. He is my hero on the drums. Even though he died before I was born, I have spent most of my life admiring him. I would also like to work with Chester Bennington, from Linkin Park. A real tortured soul but the way he channeled that into his lyrics was amazing. Two true talents and they will always be missed. GBNF

Laura:
I would collaborate with Amy Lee from Evanescence as she always been an inspiration of mine from young years. Her Music and Lyrics helped me through dark times as she is a role model of mine.

Fabio:
Music is an integral part of my life and I would find it hard to consider it a separate entity.
Music is a form of art that doesn’t necessarily require a tool, instrument or device to inspire you. Songs pop into your brain when they decide too, that can be any time of the day, in the office, in the gym at school. When an idea comes into your head, find a tool to grab it in whatever form, and develop it when you home or rehearsal room.

Jez:
I think that one of the biggest challenges we have all had in recent times is the COVID-19 crisis. It has been extremely difficult not to be able to see friends and family for everyone. However, as a band, it has completely limited our interaction with each other. What we have started is regular Zoom meetings where we discuss ideas for new songs, and we can play riffs and get a feel for how we want the song to progress. We have all also had to diversify when recording. As we are in 3 different locations, it makes recording so much more of a challenge. However, not impossible. As you can see from our recent release of Sign of the Times (Isolation mix). The whole song was recorded, produced mastered and mixed while the three of us were in different locations. Even the video for that song was done the same way. And the results are seamless.

Jez:
I use a metronome when practicing as you can’t cheat with a metronome. However, I am a big advocate of feedback loops. I would encourage anyone who is starting out or a seasoned player to get into recording what you are doing. Always! When you listen back you will hear things you didn’t hear the first time and it will speed up your development.

Fabio:
Metronome its a must when practicing, Lately I have discovered an App by fender where you can turn the metronome into a drum beat with the option to choose different genres and feel. This makes practice more fun, actually, most of our riffs are coming out of jamming with it.

Laura:
I practice a lot and sing whenever I can. I always do vocal warm-ups and I find Youtube helpful for inspiration and vocal techniques.

Fabio:
Guitaa its one of those things that you don’t know you need until you see it. When you discover it you find yourself in a kind of Disney world for musicians. A great source of tricks, tips, and plenty of new and refreshing musical ideas to dig into.

Laura:
Follow your dreams, go for it, We all have what it takes to reach our
dreams. I have played with so many bands. Even though they liked what they heard, it never worked out but I kept trying and trying and not gave up.

Consistency is the key.

So, this was “Shadows and Veils”. Want to know about their upcoming releases? Then you should follow them on social media platforms whose links are mentioned below: