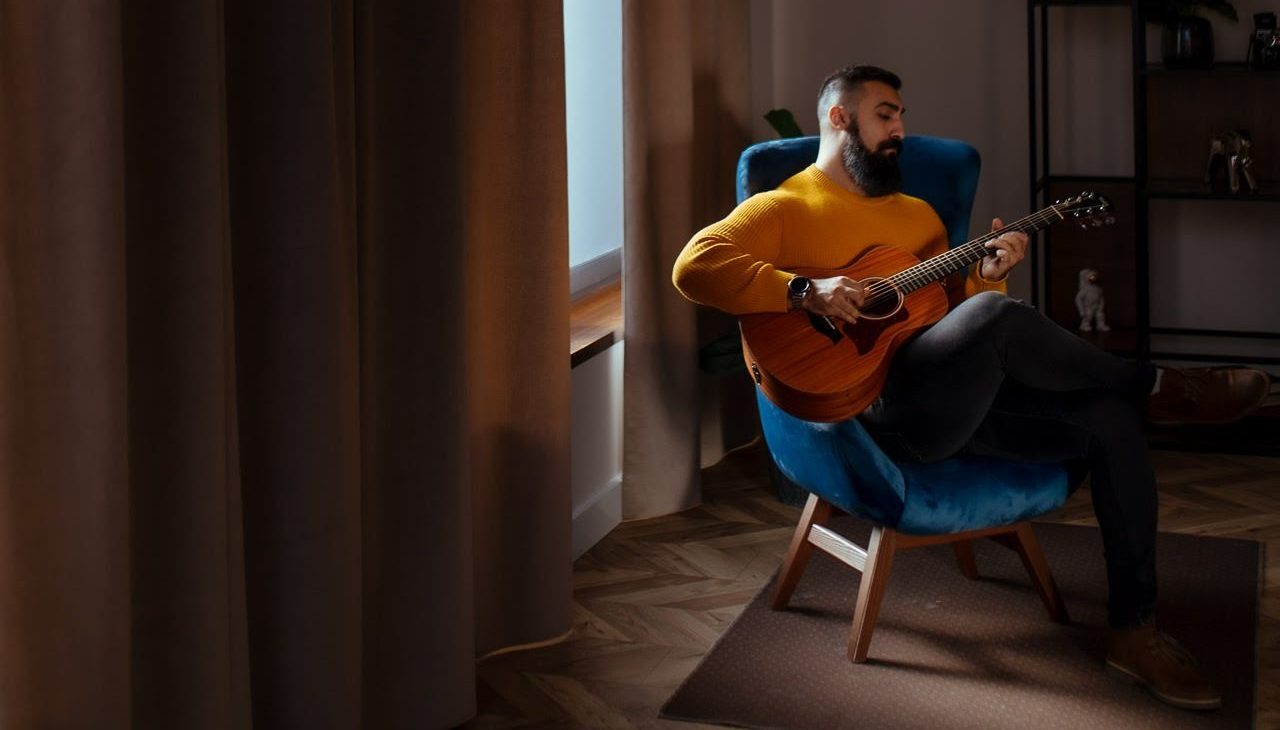 Today, on Guitaa Artist Centerstage, we have someone whose abilities will make you wow and that personality is “Aryan King”. Aryan King is a singer, songwriter, music producer, and a professional guitarist whose hard rock and blues songs can soothe your nerves instantly. His comforting Vocals, as well as songwriting ability, will keep you tuned for hours.

Team Guitaa was blessed with the opportunity to chat with the creative artist to find out more about what drives him and what his advice would be to upcoming musicians. So, Let’s get to know about this gem of an artist, about his challenges as a musician, and many more.

My name is Aryan King also known as Aryan Joseph King or Aryan J.King. I’m a producer, songwriter, singer, Blues Guitarist. I prefer playing Blues, Blues Rock for myself but in general I write and work with different genres of music.

It all started with long lasting note of Parisienne Walkways by Gary Moore and it got approved by Church solo of November rain by Slash. That was when I was sure who I want to be for my entire life.

The big is yet to come, but my first concert when I was 7 years old and there were hundreds of people watching, was such a beautiful feeling with tons of adrenaline. I really miss the feeling of my heart beating in my neck and going short on breath before stepping on the stage.

Ahhhhh, Jesus!) It’s actually the reason I am who I am today, I believe after a big fuck up or you’ll leave it forever or you’ll turn to something big. I used to be a Flamenco Guitarist since I was 3 years and my parents were kinda against me playing electric guitar. Until the moment my mother helped me out and my father agreed so we got an Epiphone Les Paul Studio Cherry burst color. I remember how I carried the guitar home in the subway with no case or bag, just holding it like it was everything I ever wanted. But I still had no amplifier or pedals to hear how it sound or practice it, so I was practicing it with the quiet sound of its own strings, I was around 14-15 years old. Next week I met a couple who were badass club/bar rockers and they loved my style with curly afro hairs and leather pants with leather bracelets. They invite me to play with them Sunday in the bar with my electric guitar. So I stepped on the stage with no earlier practice and no idea of what I’m going to play. They introduced me as Super-Special Guest. When I stepped on the stage everyone clapped and cheered like I was Freddy himself.

So I decided to go for We will rock you, and mix it up with my Flamenco track ( you already know how shitty it might sound). My volume was closed and I was pretending I’m the big badass. They were singing along with the couple who I’ve been playing with. The moment I turned up my volume it was the first time I heard my humbuckers through 5 Heads & Cabins of Marshall behind my back gain on the 10th level. Me with no pick strumming the shit like flamenco out of a Les Paul guitar. Thanks lord almost everyone was drunk and stoned. It was the first and last time in my life I was ashamed of something. So I closed myself in my room for 3 months of summer, didn’t even step out. playing 10-14 hours a day, learning from books like Heavy Metal Lead guitar by Troy Stetina and training my ear by playing alone with live concerts of Gary Moore/Eric Clapton/Pink Floyd and etc.

Gary Moore! To me he is the person who gave me purpose of life, to me he is like a father I’ve never met, like a god. Before Gary passed away, I was in Kiev and he had a concert there. I was going to buy the ticket but I was quiet short on money as a teenager and my friends told me he’s coming here almost every year so I can wait until the next year. After Ukraine he moved to Spain and… But I had a dream few days ago, And that dream was in a parallel world. Maybe I talk about it one day.

Make money until you’re able to record your album. When you got the money to record and promote yourself. Quit the profession and stick to your dreams and plans which is Music life forever.

Being unique, Not comparing myself to others, Not comparing my progression, being patient, Choosing the sound, style, the best producer who understands your vision. It’s very hard and I’m still struggling. I’m so impatient about releasing, progress. But I’ve my debut single and an Audio book calls 4D Songwriting really helped me about being patient and sleeping on my ideas and tracks until I make the perfect version of it before releasing.

Till this year I literally hated singing, so I was only a songwriter and a guitarist. This year I understand I don’t want other people to sing songs which are personal stories of my life. So I’m taking lessons by World’s best teacher. Mr. Roger Love! And for playing instruments, The best is to improvise, learn phrasing, learn scales and listen to songs I love.

While practicing I usually use my Vintera Fender 50s and a Small amp or Logic X, And a Jazz 3 Dunlop pick for the most comfortable fast playing. Earlier I used to use my Gibson Les Paul and a Fender Twin reverb, And my 25 pedal pedalboard. But honestly for home practice sticking to not a heavy weight guitar, and good natural computer effects are quite easy to setup.

For practice I usually open Editor’s pick part of Guitaa and choose a random song to play along and get the chord hints, really helps the time to pass by faster and having a good practice without waste of time.

Stay Unique, Practice as much as you can, Don’t waste time, Every second counts.

So, this was “Aryan King”. Want to know about his upcoming album which is set to be released between November-December 2020? Then you should follow him on his social media platforms whose links are mentioned below: